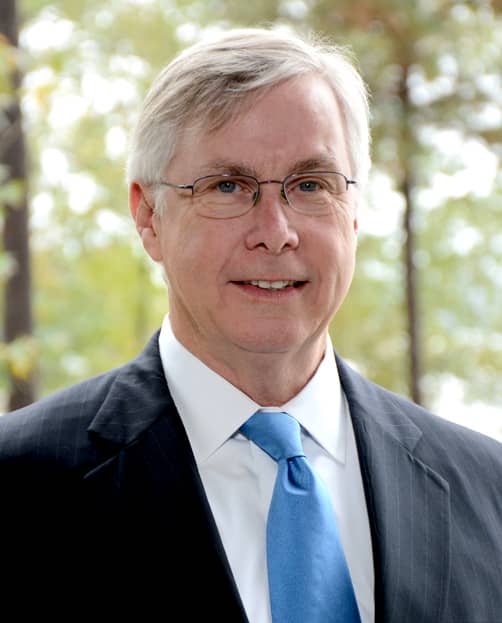 James E. Butler, Jr. is a founding partner of Butler Wooten & Peak LLP, a nationally known civil trial practice firm which has litigated cases in 30 states – from Massachusetts to California, Montana to Florida. Jim has been lead counsel in six cases where the verdict exceeded $100 million. He has won record-setting verdicts in several states. He has set the record for largest verdict in Georgia history on four separate occasions – in four completely different kinds of civil cases (medical malpractice, trucking, auto products liability, and business torts/breach of fiduciary duty). No other lawyer has done that more than once. Jim was lead counsel in the Six Flags vs. Time Warner case, a business tort case, which is believed to be the largest collected judgment in American history ($454 million). In addition to the six verdicts over $100 million, Jim has been lead counsel in cases with verdicts of $90 million, $37 million, $30 million, $25 million, $17.7 million, $15.5 million, $13 million, $8 million. $4.7 million, $4.2 million, plus another six verdicts in excess of $1 million. In addition to verdicts, Jim has served as lead counsel in False Claims Act cases that resulted in $279 million paid by the defendants, and in class action cases that resulted in over $349,500,000 paid by defendants.

Jim has long been active in politics and with conservation groups. He served on the Georgia Board of Natural Resources, was a founder of Flint Riverkeeper, Inc., of the Chattahoochee RiverWarden and the Chattahoochee Valley Land Trust, and has served on the boards of many similar groups. He has also been active in a variety of charitable and philanthropic organizations, was a founding member of the Board of the Arch Foundation for the University of Georgia and subsequently served as a member of the Board of the University of Georgia Foundation. He has received a variety of professional honors, including the State Bar of Georgia General Practice & Trial Section “Tradition of Excellence Award,” the University of Georgia Law School’s “Distinguished Scroll Award”, and the American Board of Trial Advocates Civil Justice Award. He is currently a Master of the Bench, Columbus Inns of Court. Jim has long been recognized as a leader among trial lawyers in Georgia, and served as President of the Georgia Trial Lawyers Association, and as a founding Director of the Georgia Civil Justice Foundation. He has served his profession in a variety of capacities, including serving on the State Bar Disciplinary Board. Jim has been recognized as a “Super Lawyer” for many years, and was one of the youngest lawyers ever to receive Martindale-Hubbell’s, the leading national rating agency, “AV Preeminent—5.0 out of 5.0” rating.”

In 2017, Jim Butler funded the lead gift to the University of Georgia School of Law that enabled the Veterans Legal Clinic to open in June 2018. The clinic works with veterans and their dependents to help ensure access to benefits and services, especially for those with mental or physical disabilities resulting from their time in military. In addition, the clinic provides veterans in Georgia with legal assistance they might not otherwise have access to or be able to afford, with particular regard to denied or deferred claims before the U.S. Department of Veterans Affairs. The Veterans Legal Clinic also provides support to undergraduate veterans who work in the clinic through the Department of Veterans Affairs Work Study Allowance program. The gift was made in memory of Butler’s father, Lt. Cmdr. James E. Butler, Sr., who was a fighter pilot in the U.S. Navy.

In 2018, Butler donated a gift to the UGA School of Law that would guarantee financial aid to 100 percent of veterans starting law school in Athens, beginning in 2019. This initiative is called “The Butler Commitment.” UGA School of Law Dean Peter B. “Bo” Rutledge said, “What a better way to honor military women and men for their service then to provide monetary support for their education…After serving our country, just a Jim’s father did, these men and women are seeking to build their careers. It is an honor to be able to support them in their efforts to become lawyers and to obtain justice for others.”

The Butler Commitment was renewed for the second straight year in September 2019. Because of Butler’s gift, the UGA Law School committed to providing financial aid to every veteran beginning in the fall of 2020. UGA School of Law Dean Peter B. “Bo” Rutledge said, “Jim Butler continues to strongly believe in those who have served our country similar to his father and brother, and the school is happy to honor the Butler family connection to military service in this manner.”